Polyamines are positively charged, metabolically distinct entities within human cells that bind to and facilitate DNA replication, RNA transcription, and protein synthesis and function. Polyamines are critical for progression throughout the cell cycle, including playing a key role in cell division, as well as in programed cell death (apoptosis).

It is believed that many cancers, especially oncogene-driven cancers, might be sensitive to interference with polyamine metabolism. The natural polyamines putrescine, spermidine and spermine are intimately involved in growth-related processes, wound healing, and the development of cancer. Under normal conditions, the pool of polyamines is tightly controlled through regulation of synthesis, catabolism and transport mechanisms (Gerner and Meyskens 2004). The loss of this tight control can result in an excessive accumulation of polyamines, which favors malignant transformation of cells. Consequently, with the loss of growth control in cancer cells, the transformed cells may be more sensitive to polyamine depletion than normal cells. Thus, the polyamine metabolic pathway is a rational target for therapeutic intervention (Casero 2018).

Immune systems require multiple components, including polyamines, for a normal immune function. As such, polyamines are important modulators of the immune response, particularly in the tumor microenvironment where they are found in high concentrations. High levels of polyamines are present in tumor cells and in autoreactive B- and T-cells in autoimmune diseases.

Our Polyamine Metabolic Inhibitor (PMI) platform is based upon exploitation of the key role played by polyamines in mammalian cells. The company’s lead assets are ivospemin (SBP-101) and FlynpoviTM (eflornithine (CPP-1X) and sulindac) which provide a multi-targeted approach to reset dysregulated biology present in many types of diseases such as cancer and autoimmunity. Our lead assets target the polyamine pathway at complementary junctions which have been shown to be altered is disease (Figure 1). In particular, these agents have the potential to suppress and prevent tumor growth, enhance anti-tumor activity of other anti-cancer agents, and modulate the immune system. 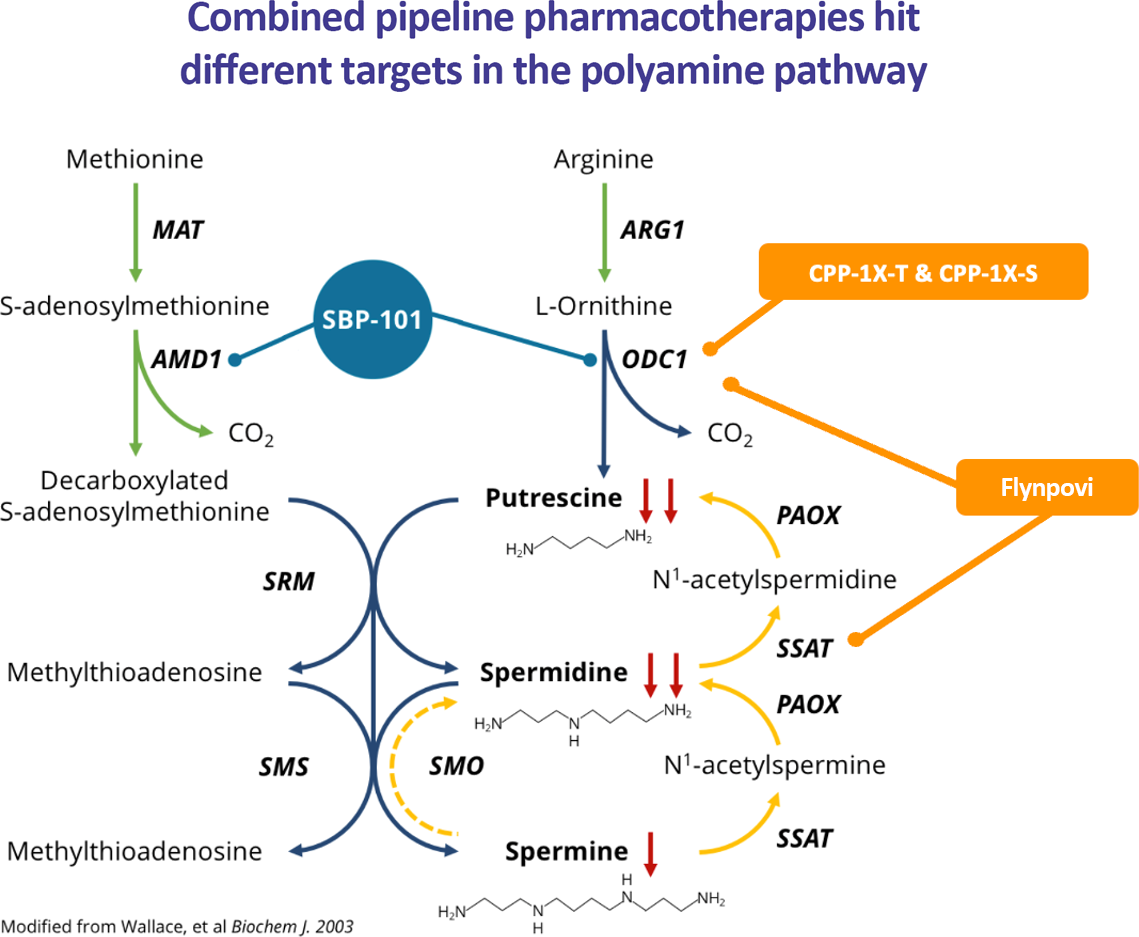 ivospemin (SBP-101) is a proprietary polyamine analogue, which we believe accumulates in the exocrine pancreas acinar cells due to its unique chemical structure. ivospemin (SBP-101) was discovered and extensively studied by Professor Raymond J. Bergeron at the University of Florida College of Pharmacy. It inhibits both S-adenosylmethionine decarboxylase 1 (AMD1) and ornithine decarboxylase 1 (ODC1), both key enzymes in polyamine biosynthesis, thus reducing the intracellular concentrations of polyamines and slowing or preventing the ability of targeted cells to grow and divide.

As laboratory studies suggest, the primary mechanism of action for ivospemin (SBP-101) has been demonstrated to include the enhanced uptake of the compound in the exocrine pancreas, therefore, pancreatic cancer was logical for the initial development of this compound. Sufficiently high dosing in animal models leads to correspondingly depressed levels of native polyamines, with caspase 3 activation, PARP cleavage and apoptotic destruction (programmed cell death) of the exocrine pancreatic acinar and ductal cells without an inflammatory response. Importantly, pancreatic islet cells, which secrete insulin, are structurally and functionally dissimilar to acinar cells and are not impacted by ivospemin (SBP-101). In animal models at two independent laboratories, ivospemin (SBP-101) has demonstrated significant suppression of transplanted human pancreatic cancer cells, including metastatic pancreatic cancer growth.

Ornithine decarboxylase is the first and rate-limiting enzyme in the biosynthesis of polyamines which catalyzes the conversion of ornithine to putrescine and regulates the biosynthesis of polyamines in mammalian as well as many other eukaryotic cells. CPP-1X, also known as Eflornithine and α-difluoromethylornithine (DFMO), is an ornithine analogue. CPP-1X irreversibly binds to ODC1 and prevents the natural ODC1 substrate, ornithine, from accessing the active site of the enzyme (Meyskens and Gerner 1999). The administration of CPP-1X decreases both ODC activity and polyamine concentrations. In genetic mouse models with an APC gene mutation, the administration of CPP-1X reduces intestinal carcinogenesis, decreasing the concentration of polyamines through transport and catabolism and inhibiting tumor development.

Mice with a mutation of the adenomatous polyposis coli (Apc) tumor suppressor gene develop intestinal tumors in numbers similar to those found in patients with familial adenomatous polyposis (FAP). Mutations of the Apc gene increases the activity of ODC and leads to increased intestinal polyamine levels. Studies in animal models of FAP indicate that CPP-1X alone is effective in reducing the number of intestinal tumors (Erdman et al. 1999) and colonic tumor burden(Yerushalmi et al. 2006). CPP-1X may lower polyamine levels in colorectal mucosa and skin cells (Gerner and Meyskens 2004).

Sulindac is a member of the arylalkanoic acid class of NSAIDs and is a non-selective inhibitor of cyclooxygenases involved in prostaglandin synthesis. The sulindac metabolite, sulindac sulfone inhibited cell growth, and induced apoptosis and the expression of spermidine/spermine N-acetyltransferase (SSAT1), a polyamine catabolic enzyme implicated in polyamine export (Xie, Gillies, and Gerner 1997). Treatment of cells with sulindac sulfone induces SAT1 expression and stimulates polyamine export.

Flynpovi, the combination of CPP-1X and sulindac works through a dual mechanism of action to decrease the polyamine pools by suppressing polyamine synthesis and enhancing polyamine catabolism and export. CPP-1X is the irreversible inhibitor of ODC which is responsible for de novo synthesis of polyamines and sulindac regulates SSAT which plays a role in polyamine export and catabolism. Hence the combination, Flynpovi, inhibits the generation of new polyamines and also removes polyamines obtained from the diet and microbiome.

Flynpovi has been shown to reduce polyamines in the GI tract in both the preclinical and clinical settings. In the study by Igantenko et al, the effect of CPP-1X alone and in combination with non-steroidal anti-inflammatory drugs (NSAIDs) sulindac or celecoxib on intestinal tumor number and grade and polyamine content was evaluated in ApcMin/+ mice (Ignatenko et al. 2008). Administration of CPP-1X in combination with sulindac was superior to each single agent at significantly (P < 0.05) decreasing putrescine, spermidine and total intestinal polyamine concentrations to below baseline levels in the ApcMin/+ mice. Additionally, in this study with the exception of the 0.5% CPP-1X treatment group, all treatment groups developed significantly (P<0.05) fewer tumors/animal than the control group. The combination treatment of 2% CPP-1X and sulindac suppressed intestinal tumorigenesis to a level that was not statistically significantly different from that for sulindac alone. Although sulindac alone produced a significant decrease in the number of intestinal tumors in ApcMin/+ mice, it did not reduce the percentage of high‑grade adenomas. However, the combination of CPP-1X and sulindac significantly (P<0.05) decreased the number of high-grade adenomas compared to the sulindac alone group.

The company believes that PMI technology will have broad applicability beyond PDA, FAP and colorectal cancer. Early stage studies are underway in a variety of solid tumor models.